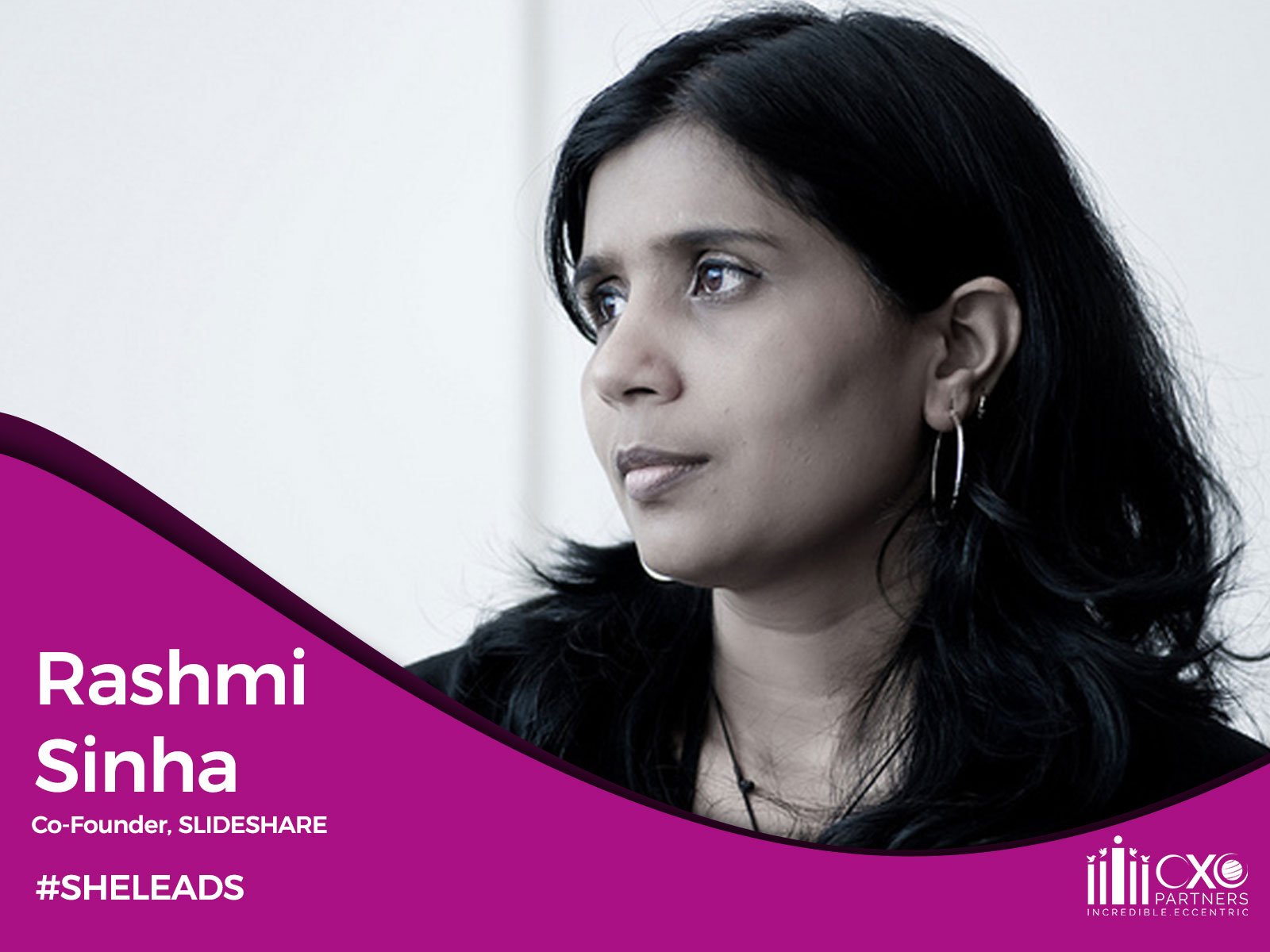 Rashmi Sinha’s career seemed to be destined in academia. She had done her Ph.D in psychology at Brown University. She was bored of writing papers during her postdoctoral work in neuroscience at the University of California. Subsequently, she left academia in 2006 and embarked on the journey of entrepreneurship. Rashmi teamed up with her husband, Jon Boutelle and her older brother, Amit Ranjan to launch startup software called SlideShare. Had it not been for that period of mundaneness and humdrum, she wouldn’t have become an entrepreneur.

Rashmi was born in Lucknow and grew up in Kolkata and Allahabad. Hailing from a family of professionals, she had no business and entrepreneurial influence around her.

She acquired post-graduation degree in Cognitive Science from Allahabad. Later, she went to U.S for her Ph.D in Brown University. She then took up Computer Science with the American researcher and professor, Andy Vann Dam. She got exposure to the world of human computer interaction (HCI) way of thinking. After that, she wrote a thesis on Cognitive Basis of Categorical Learning.

She further discovered her love for web. Rashmi got a department transfer and started working on search engines and recommender systems. The insatiable avarice to learn new things was always there. Even though, she loved her work, she did not want to pursue academia anymore. She found it dull and slow-paced. It was only when she realized that she finds practical problems more interesting and enjoyable, her entrepreneurial mindset started taking shape.

The SlideShare owner had a passion for creating new things. She founded Uzanto which was a user experience design consulting company. While she was working on a project with eBay, her husband joined her. Her software engineer husband found that the method used for the project can be translated to software. This led to birth of a new venture called MindCanvas in 2005. It was an online game kind of software made for running surveys and other kind of customer research. MindCanvas was sold to top companies like Microsoft and Yahoo. This became a stepping stone in the life of entrepreneur woman, Rashmi Sinha.

Rashmi always wanted to make a meaningful impact by ideating something new and big. After lot of brainstorming with her husband, Jon; they observed that there is no website that exclusively caters shared PowerPoint presentations. People used to share presentations via emails, pen drives and hard drives but there wasn’t a one-step repository to it. In early 2006, Rashmi along with her software engineer husband, Jon and mechanical engineer brother, Amit Ranjan ideated SlideShare.  SlideShare was live in early October of 2006.

SlideShare started operating in two offices – at San Francisco with 8 employees and Delhi with 20 employees.

It soon became famous globally with entries of thousands of PowerPoint presentations each day. Audience perceived SlideShare as next generation business media site that revolved around presentations that play pivotal part in corporate world and business. Unlike other content driven websites, Slideshare doesn’t have content creators. The users are content creators. The website generated organic traffic and wasn’t used for advertisements. It underwent enormous growth at a very fast pace which makes her a proud owner.

The most noteworthy aspect of her entrepreneurial pursuit is her democratic style of management. Here are some points that elucidate her method of working –

Her contribution towards SheLeads – She catches up with people who are in need of startup advice and finds time for upcoming women entrepreneurs. She was quoted saying –

“I’m seeing more and more technically-inclined Indian women nowadays. There is definitely potential to bring that talent, with a little bit of mentorship and encouragement, to foster a wave of female entrepreneurship.”

Rashmi Sinha’s urge to impact the world and her vigor in business makes her a successful entrepreneur. Her leadership attributes and vision to promote SheLeads is inspirational and something that future entrepreneurs need to learn from.